There is nothing unusual about seeing pontoon boats on the Indian River, but go over to the boat ramp and see what happens when a certain new brand of pontoon boat shrinks or expands in width right before your eyes. That is the dream of Ralph and Tim Poppell and it is soon to become reality.

Ralph Poppell is well known to folks in Vero and beyond, growing up in the family-owned citrus business. Then, in 1984 he acquired Float-On, a Fort Pierce manufacturer of high quality boat trailers, moving the company to Vero Beach in 1999 where it has become a leader in the industry. Then, a lifelong interest in politics led him to run for the Florida House of Representatives. He was elected and served District 29 from 2002 to 2010, the maximum four terms. Then he went back to his successful Float-On company, now run by his son, Tim Poppell. 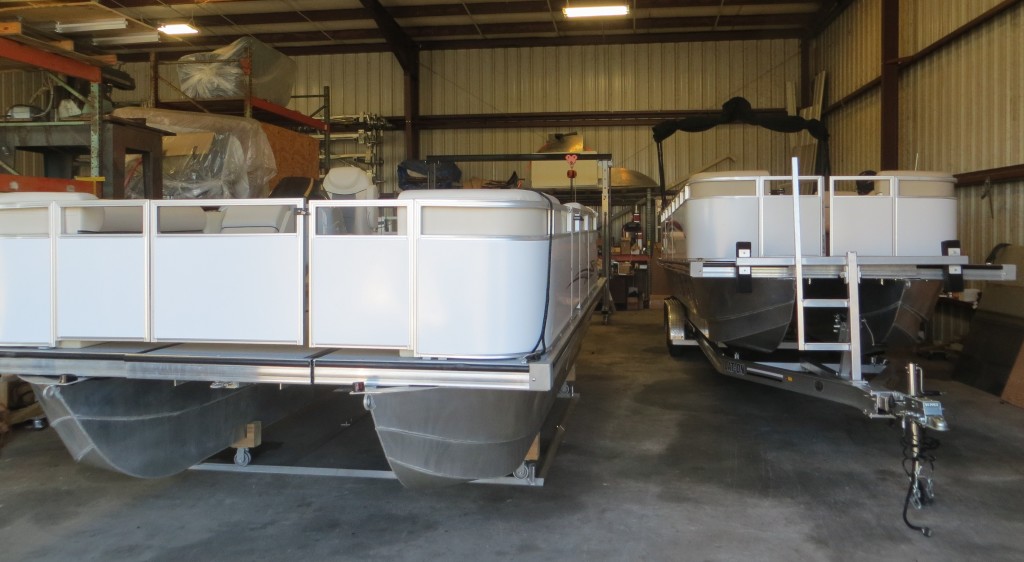 That would be enough to claim a life well lived, but it was before he thumbed through a boating magazine one evening came up with the idea that could change an industry. “We design trailers to fit every boat bottom except for pontoon boats, which is one of the fastest growing segments of the pleasure boat industry. So I called my son, Tim, who is president of our company, and said what if we instead designed a pontoon boat that can fit on our trailers.”

The concept, which was strictly in Ralph Poppell’s mind at the time, was to create a mechanism whereby a pontoon boat could be expanded or retracted in width. There were several major obstacles in their way. First of all, according to Poppell, “Pontoon boats are cumbersome and hard to handle.”

That wasn’t the biggest problem though. Float-On builds trailers but they have never built a boat. Also, the concept Poppell imagined did not exist in the boating industry. Neither did the mechanism they would need to make it possible. On top of that, the mechanism must be easy to operate. “Press a button and it expands, then press the button and it retracts to fit on a trailer,” he theorized.

But Poppell is much more a man of action than of theories. “Tim and I developed the concept, then we retained an experienced naval architect and marine engineer, Jeff Seyler, to put the concepts down on paper. We wanted it to be a full size, ten-foot wide pontoon boat on the water, then retract to about seven and a half feet to fit on a trailer of our design and into a one car garage for storage.”

Of course, since there was nothing like it on the market, they couldn’t just go out and buy parts. “First we got together with injection molding people to create the pontoons, which by the way, could not be the standard round pontoons which are too wide, so we ordered a performance design.”

After coming up with a preliminary design, they assembled two prototypes with parts ordered from other companies to their specifications. After a year of effort, the mechanism expanded and retracted properly, fit on a trailer they designed specifically for this boat, and passed the final test in water.

The prototypes were ready in time for the big International Miami Boat Show, so they brought them down to display. Poppell explains what happened next. “The Innovation Awards Committee came around the day before the show opened to see what might be new on the market. They awarded us the Innovator of the Year, Pontoon Division.”

Tim Poppell could not believe the reception. “We drew attention every day, created some real excitement. The best compliment came from long-time industry people who said, ‘it’s about time,’ or ‘wish we had thought of that.’”

So what exactly is the market potential for this retractable pontoon boat? According to Ralph Poppell, “The pontoon market is about 31,000 boats per year, which is up 10.5 percent from last year and represents the fastest growing segment of the pleasure boat market. They are very popular in states with many lakes, almost entirely used by owners and renters for fun, family and parties. But most boat manufacturers give little concern about how the boat will get there and back after the party’s over.  We are the first to design a pontoon boat that fits on our specially designed trailer, no wider than that of any standard pleasure boat, and the first to have boat and trailer fit into a standard one-car garage.”

The Poppells created a new company for this new product, Island Boats, Inc. But now the major costs lie ahead. Building boats in a trailer facility, hiring people, expanding their facility. To help get them started, they turned to the Indian River County Chamber of Commerce. According to Helene Caseltine, “We all went to the County and it certainly helped that Ralph and Tim were longtime residents with a proven track record in business. They anticipated creating 45 full-time jobs with benefits at or above the average wage in Indian River County. The County Commission approved a local jobs grant of $137,000 paid over five years assuming the company meets its hiring goals. Those are not front end payments either. An employee must be on the job at least a year before the company can apply for the benefit.

“They are also building an addition on to their facility, which could be eligible for tax abatement, another way to help them conserve cash as they ramp up production.”

Initially, the Poppells will assemble boats in their existing facility, buying parts and components designed for them by other companies until they can eventually produce everything as they do with their Float-On trailers. “Our short term goal,” says Tim Poppell, “is to produce a boat a day as we build our company for the long term.”

The Poppells have plenty of room on their 98th Avenue property for expansion, whether for their pontoon boats or whatever new product the man of action, Ralph Poppell, theorizes about.